In my adventures in online streaming this week I feature someone who Kat and I raided after a stream a few weeks ago and became an immediate fan of his style of humor and interaction with the audiences.  His logo’s and emotes are top notch and I love the cartoon style.  He wears an aviator helmet and goggles to match is “baron” of the sky’s theme and he is often seen in the top streamer ranking categories on the Royale Streamers discord group.  Th3beardedbaron makes excellent use of scenes and transitions and really has a professional looking stream while keeping things engaging and entertaining.

Here is my interview with Th3beardedbaron

Justin: Tell Us About Yourself (notes include name (or just handle) where you are from…etc. 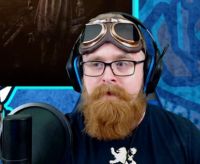 Th3beardedbaron: I started streaming in September 2018 after working with ChocoTaco’s dad and hearing stories about Chocotaco. It made me believe I could do it myself.

Justin: What streaming platforms do you go live on most often (Twitch/Mixer/YouTube…etc)?

Th3beardedbaron: Only stream through Twitch currently.

Justin: What devices do you prefer to stream from? (Console, PC…etc)

Justin: Yeah, though consoles do get some exclusives like Astral Chain for the Nintendo Switch which I really want.  What is your preferred streaming hardware/PC/software setup? (Webcam, Elgado Streamdeck, SLOBS/StreamElements…etc)

Justin: What is your short term goal < 3 months and long term goals with streaming?

Th3beardedbaron: Short twerk goal is to get partner which is a goal I never thought I’d be close to getting to. Long term would be to be able to stream full time.

Justin: Nice, yeah of course I want to work toward partner as well, though I personally won’t be streaming full time I want to have my channel be 24×7 with my stream team. Do you have any advice you give to other people wanting to get into streaming and entertainment?

Th3beardedbaron: Being successful at streaming especially starting off is networking. 80% of your effort should be into networking as 20% into actual streaming.

Justin: Where, When and What Can People Find You Streaming and What Can They Expect From Your Streams and what is the Wheel and Dungeon?

Th3beardedbaron: People can see me every Monday, Thursday and Sunday from 7-12pm EST. They can expect me playing a variety of horror games, potatoing hard and laughing along the way. I consistently play games with viewers and love to interact with my chat. I’ll play anything from dead by daylight to immortal redneck or jack pack party games to keep chat engaged. I’ve got a wheel currently that I spin for every subscription, some things are good for the viewer, some bad but in the end it’s a lot of fun. One of the spins could land you in the dungeon/basement. My chat seems to like it down there even though I tell them repeatedly they aren’t supposed to lol.

Watch live video from th3beardedbaron on www.twitch.tvJustin: Do You Want to Give Any Shoutouts or Promote Anything?

Th3beardedbaron: I’d like to promote mental health awareness. If your feeling down, come talk to me day or night. I’m here to listen, and you aren’t alone.

In summary I have to say Th3beardedbaron does very fun and interactive streams with his audience, if you are looking for someone new to follow on Twitch or check out I highly recommend you visit and say hi.  Let him know if you learned about him from this interview.